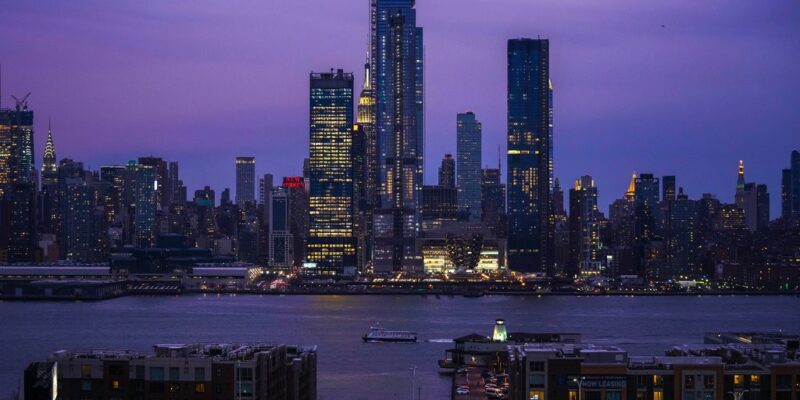 New York City may require more eco-friendly building materials, but neither glass nor steel would be prohibited.

As he stood on the Queens shoreline on Earth Day, Mayor Bill de Blasio issued a stern warning that the familiar Manhattan skyline behind him was about to change.

“We are going to introduce legislation to ban the glass and steel skyscrapers that have contributed so much to global warming,” he said on Monday. “They have no place in our city or on our Earth anymore.”

But as far as an actual prohibition against glass and steel skyscrapers? Not exactly.

Mr. de Blasio’s plan involves legislation that would institute new energy code requirements as a prerequisite for a building permit. “The kind of the glass and steel buildings of the past, and some bluntly were being built very recently, are just not going to be allowed any more,” the mayor said.

City officials said that they did not know the specifics of Mr. de Blasio’s proposal, and that any such change would require City Council approval.

“The Council supports the construction of glass and steel structures that are more energy-efficient, but there is no particular ban on these materials,” Juan Soto, a spokesman for Council Speaker Corey Johnson, said.

The lack of details troubled many real estate industry leaders and architects.

“Everyone is trying to figure out what the mayor meant,” said Adam Roberts, director of policy for the American Institute of Architects New York. “We just hope that the mayor misspoke.”

But one thing seemed clear: Neither glass nor steel would be banned.

Even the mayor allowed that recent buildings would likely meet whatever new standards he was envisioning.

Mr. de Blasio mentioned the American Copper Buildings in Manhattan’s Murray Hill neighborhood and some buildings on the Cornell Tech campus on Roosevelt Island as examples of how glass-wrapped structures can be made energy efficient: using triple glazing and high-tech heating and cooling systems.

To underscore that point, Mark Chambers, the director of the Mayor’s Office of Sustainability, was quick to add, “I want to call out that it doesn’t mean that buildings can’t use glass anymore.”

Mr. de Blasio’s words nonetheless sent a chill through the real estate and construction industries, especially given the timing: Days earlier, the City Council passed legislation that would force buildings to reduce their greenhouse gas emissions by 40 percent by 2030, or face fines that could reach into the millions of dollars per year.

The new requirements were part of Mr. de Blasio’s Green New Deal, a $14 billion plan to help the city reach its goal of becoming carbon neutral by 2050. Mr. de Blasio is mulling a run for president, and he has unveiled proposals on such topics as paid time off and climate change as examples of how policies in New York City could be adopted nationwide.Big Buildings Hurt the Climate. New York City Hopes to Change That.April 17, 2019

But his proposal to potentially remake the city’s skyline has raised concerns among developers and architects, who question whether the mayor’s ambitions can coexist with the demands of clients and commercial tenants. There have been 129 buildings with glass curtain walls constructed in the city since 2015, according to the Department of Buildings.

“It was sort of a naïve statement,” Mitch Simpler, the chairman-elect of the American Council of Engineering Companies, said about the mayor’s remarks on banning glass towers.

From improvements in glass and shading to new types of interior lighting that reduce energy consumption, “every year these buildings perform better and better,” Mr. Simpler, who is also a managing partner emeritus of Jaros, Baum & Bolles, said.

The real challenge, he said, would be retrofitting older buildings to meet the requirements in the recent City Council legislation; Mr. Chambers had estimated that the cumulative cost to building owners to make necessary upgrades would exceed $4 billion. Demolishing those buildings would contribute greatly to greenhouse gas emissions.

The best things to do in N.Y.C. during the hottest season of the year. This limited-edition newsletter will launch before Memorial Day and run through Labor Day.SIGN UP

“This is a huge lift. In some cases, we will have to redo the skin of the building,” Mr. Simpler said. “Our real challenge is to go back in time and take these 75-, 100-year-old charming and architecturally unique buildings and make them perform like a Ferrari.”

City officials maintain that those changes are overdue. A city study found that close to 70 percent of the city’s greenhouse gas emissions came from buildings, and those with glass exteriors were among the worst offenders.

Mr. de Blasio cited buildings at Hudson Yards “as examples of the wrong way to do things,” although he did not specify which ones.

Officials at Related Companies, developer of the main site at Hudson Yards, took offense at that characterization. They cited 10 Hudson Yards, a 52-story office tower with an angled roof and gas-powered microturbines that heat and cool water with twice the efficiency of standard systems. A storm water retention system collects rainwater, which is then recycled and used in the building’s cooling towers and to water the landscaping.

The efficiencies have earned the structure a platinum Leadership in Energy and Environmental Design rating from the United States Green Building Council. The building, like many in the new development, is sheathed in high-tech, energy-efficient glass.

“Hudson Yards was planned as the largest LEED neighborhood in New York City,” Joanna Rose, a spokeswoman for Related, said in a statement.

It is that kind of language that has the real estate industry concerned.

“We haven’t seen any law drafted or any policy drafted,” said Carl Hum, a senior vice president and general counsel for the Real Estate Board of New York. “We are curious, if the mayor is banning glass and steel, what the alternative will be?”

City officials acknowledged reaching out to the real estate industry after the news conference to explain what the mayor meant by the word “ban.”

“There was a little bit of qualification,” one industry official said he was told. “Perhaps the mayor was overenthusiastic.” Another industry official said he was told that “there’s no new legislation” and that Mr. de Blasio was referring to the City Council legislation. Both officials spoke on the condition of anonymity for fear of damaging their relationship with City Hall.

But the mayor and Mr. Chambers made clear that the city intended to introduce new legislation by year’s end, and that they had begun discussions with Council leaders. The mayor said he hoped that the more stringent energy codes could be in place by early next year.

“Developers will have to meet our new standards,” Mr. Chambers said. “Business as usual won’t cut it.”

But in a city where rezoning efforts have brought developers to lower-income neighborhoods, Mr. Roberts, the policy director for the American Institute of Architects New York, cautioned that those areas might be deprived of the type of structures seen elsewhere in the city.

“Part of what makes New York so interesting in terms of our architecture and compared to other cities is our diversity,” he said. “We have everything here going back hundreds of years.”

Costa Constantinides, a councilman who represents Queens and is chairman of the Council’s Environmental Protection Committee, said he hoped to have a robust discussion with the real estate industry after the proposed additional adjustments to the energy code.

“We have to come up with policies that reflect the seriousness of climate change,” Mr. Constantinides said. “I don’t think anyone will stop building in New York. They will just be in line with our goals.”